We may earn money or products from the companies mentioned in this post.

Gotta love the Kobelli Moissanite collection! We’ve spoken about Kobelli.com before as a great source of Moissanite engagement rings and other jewelry (if you’re in the market for Moissanite, that is, which is a synthetic gem stone). I have since made a brief video to show you around the Kobelli website – and I’m posting that video here, below! think what I’m going to have to do is make more than one video about it because it’s just going to go on too long, and I don’t want to do that to you guys LOL!

So anyway, so to start the video series off, what I did was talk briefly about Kobelli Moissanite jewelry in particular in this video. You can read what I said below as well if you prefer reading to video. 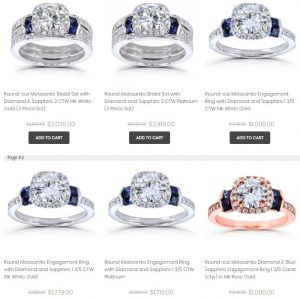 As mentioned earlier in this blog, Kobelli is based out of Los Angeles and they’ve been in business since around 1980, so they’ve got some longevity to them, and they’ve made a name for themselves as one of the leading designers of Moissanite jewelry. In the video, I show you some examples of the Forever One line of fine jewelry by Charles and Colvard. The creation of Moissanite in the laboratory was pioneered by Charles and Colvard, so it’s fabulous that Kobelli carries their brand.

If you read my earlier article about this mineral, this may be a bit repetitive, but basically, Moissanite is the name that they give to the mineral silicon carbide, and it was called Moissanite after Henri Moissan, who identified it in 1893.

And what I learned is that even though it’s natural and it obviously occurs in nature, the crystals that could possibly be gem quality are just too small and rare. The original process by which it’s created was protected for a long time by the patents that were held by Charles and Colvard.

Now, I have been in contact with Kobelli with representatives of the company and they did say that while they do get their Forever One from Charles and Colvard, they also have their own Moissanite collection, from their own lab in California.

I wanted to mention a little bit about the optical properties of Moissanite. It’s got a brilliance that a lot of people say rival or even sometimes exceed diamonds. It’s an affordable option to diamonds and it measures. I went to the International Gem Society’s web page (which you can see in the video, or also right here where I looked it up).

Yes, they do. Think about the physical makeup of the mineral in comparison with a natural diamond. A natural diamond has a hardness on the Mohs scale of mineral hardness of 10 and Moissanite has a 9 1/4 and at that link to the International Gem Society page, or on the video, over here in this corner you can see cubic zirconium goes down to 8 or 8.5.

Moissanite vs Diamond: Which should I buy?

Some people ask, while why would you buy Kobelli Moissanite if you could just buy a diamond? But, you know what, there are some people who don’t want a diamond. Oftentimes, they’re thinking along the lines of purchasing conflict free jewelry. They are thinking more environmentally – perhaps about mining, for example, the effects of mining on the environment and also on the workers. And so, conflict free stones such as Moissanite, are a really nice option for a lot of people.

Like I said, Kobelli Fine Jewelers have made a name for themselves for one of the leaders in Moissanite jewelry.

Of course, Kobelli isn’t JUST about Moissanite. They have a lot more collections to choose from! So, please check out their great online store at Kobelli.com and if you want to check out Kobelli Coupon Codes, we have ’em! Simply Click Here to see all of the current promo codes and sales!

Thanks so much! Here’s the video!

Related Articles
See our NEW JEULIA Coupons!
CLICK HERE for ALL the Newest Jeulia Coupon Codes. 15% and 20% off Codes!
Kobelli Coupon Codes!
CLICK HERE for the Kobelli Coupon Codes! Great Savings - $50 and $100 off + More!
GREAT Savings at Beverly Diamonds!
CLICK HERE for Beverly Diamonds Coupon Codes! EXCEPTIONAL Savings $100 Off!
Recent Posts
FTC Advertising Disclosure
When you use one of the links we provide, we may receive commissions for purchases made through our recommendations, reviews, or advertisements here at DealUniverse.org. We may accept sponsorship or other forms of compensation. NOTE: You will NEVER pay more just because you're using one of our links. We are given an opportunity to pass offers (and savings) on to you through the referral links that the merchants allow us to use. The commissions we receive - if any - will be paid to us by the merchant - NEVER by you. We just wanted to let you know that. And, if you do choose to make a purchase after clicking one of our links, we are very thankful! Thank you for visiting!
Blog Categories
Close